When you think about selling stuff on your website, or making money from your blog, do you ever find yourself saying: I know, I’ll tell stories! That will increase my sales!

Well, here’s the thing: David Ogilvy was one of the first big advertising guys to prove that storytelling (a full page worth of small-font text) sold extremely well.

But these next two real-life examples show the unmatched power of storytelling even in difficult arenas like art and flea market sales. The great thing about these two examples is they show clearly how the revenue increase did NOT result from discounting, price-matching, adding new features, pairing with a free bonus, adding scarcity (only available this weekend!), or any other typical sales technique.

Nope. The massive increase in revenues was attributable to one thing only: Storytelling.

“The artist I interviewed conducted an experiment by offering the same artwork (an etching) for sale on two different websites. She provided two dramatically different stories about the piece on each site: one story was extremely poignant while the other was mundane. The piece with the compelling emotional story attached to it sold for almost double the price of the same piece that was described in cool, unemotional and technical terms.”

Chris goes on to provide other examples and the one that struck me the most was an Ebay experiment, where a group took items purchased at thrift stores and flea markets and then put them up for sale on Ebay… with a good story attached.

The took this wooden animal figure, purchased for 75 cents at a thrift store: 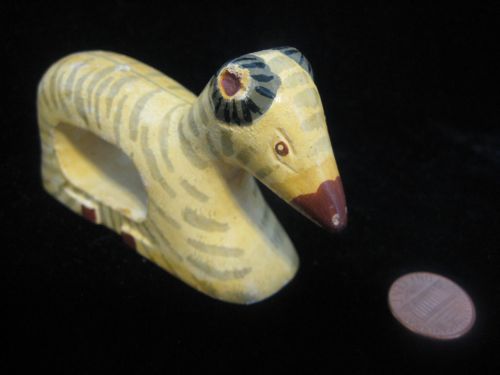 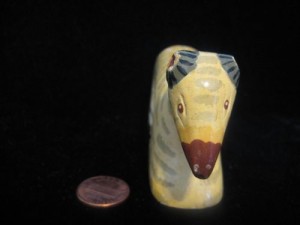 Maybe you haven’t monetized your blog yet, and you’re worried about being able to sell anything. Maybe you don’t even like selling! Or maybe you think you’re a ‘bad salesperson’. Those are actually GOOD things! Because people hate being sold to. But they LOVE hearing stories.

In Listen To Your Freedom, we have an entire Module on telling your stories. I make it super easy for you and you can either write or audio record your stories. These stories then form the basis for your website pages, your product listings, and your service offerings. Sound like fun? You bet it is!